An Insight into Rumination

Rumination is the process by which a cow regurgitates previously consumed feed and masticates it a second time.  The rumen of a dairy cow and its microbes enable it to digest plant fibres which allow the dairy cow to convert forages which humans are unable to digest into nutritious foods for humans.

The amount of time a cow spends ruminating will depend on their diet but a healthy and normal cow will generally ruminate for 8 to 10 hours a day.  Rumination can take place 15 to 20 times a day for approximately 30 minutes and she will cud- chew 50 to 70 times before swallowing again and ideally this rumination will happen while the cow is in a lying position.

Why do cows ruminate?
When a cow ruminates they are regurgitating previously consumed feed, this re-chewed feed along with saliva is swallowed a second time, it is the floating, large particles on top of the rumen which are re-chewed. 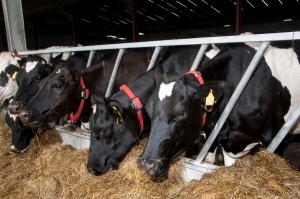 One purpose of rumination is to decrease particle size and increase surface area of the feed.   This helps the rumen microbes break down ingested feed by a fermentation process.   Another important purpose of rumination is that of saliva production, an animal should produce between 100-180 liters of saliva to help keep the rumen pH and decrease the acidity which results from digesting carbohydrates.

If the cow is ruminating less than normal, the fibrous particles will stay in the rumen longer causing the rumen to feel full. The cow will eat less and as a result produce less milk.

Why is rumination an important indicator of health?

As soon as a cow feels sick she is eating less than normal, this is a reaction we know from every animal even from ourselves. Once the feed intake is lower, rumination immediately starts to decrease. If the farmer can be made aware of this at an early stage they can respond and treat the cow before they become seriously ill.

If a cow not ruminating enough, it can be an indicator for many disorders

Rumination data gives an indication of each cows feed intake. Rumination data also gives an insight into the feed quality and by monitoring the changes in rumination behaviour around the feed changes the quality can be assessed by assessing the cow’s reactions.  Any change in diet has to be introduced slowly over a number of days and weeks to enable the microbes to adopt, it is important to carefully monitor the herds response to change of diet and adapt accordingly.

The monitoring of cows eating habits and rumination data provides the farmer with a good indication of their herd’s metabolism and health – most importantly it provides them with the opportunity to detect sick cows and provide the necessary attention.

Herdinsights measures the animal’s rumination through the HerdInsight’s smart collar by detecting muscle movement in the neck.  Each cow has her own rumination rhythm and time, therefore the system compares current data with the animals ‘normal’ behavior.   Any negative variance from the cow’s normal rumination behavior will be detected and an alert sent directly to the farmer’s phone.  This alert enables the farmer to react in a timely manner to treat the animal.

In addition to the health benefits as the system also provides rumination data for the whole herd it enables the farmer to monitor the herd’s overall diet and monitor the implications of any dietary changes.

The graph shows the rumination history of a dairy cow from 29th of October to 19th of November.   If we look at the 7th of December we can see a dip in rumination.

Looking closer at the 7th of November we see that the cow has been ruminating badly over 24 hours.  This is obviously not the animal’s normal behaviour and is a clear indicator that the animal is sick. In this case the farmer will receive a health alert to his phone.

Rumination along with feeding and resting data are also used to calculate a health index for each cow.  This builds a database of health for both the individual cow and the entire herd. Rumination data can be studied by the farmer when he changes his feed ratio or the cow’s environment, and therefore a clear indication on the effect those changes have on the animal’s health.
*Mareike Kortenjann, HerdInsights German Dairy Specialist
Graduated Agricultural Engineer (Dipl.Ing.agrar)
By Cora Harty|2019-03-22T15:37:37+00:00December 7th, 2017|